We decided to sit down with a beer and enjoy the atmosphere before strolling back along the river and rejoin the mayhem. We found a table with a marvelous view over the river and the quay opposite and ordered 2 Kriek Boon beers. One 500 ml for two – just a little bit more than if we’d ordered two separate ones. The place is cosy and a bit naff, with an old stove in the room and a few low slung oldfashioned wing chairs in the corner. Every chair is taken, many by Dutch day trippers. 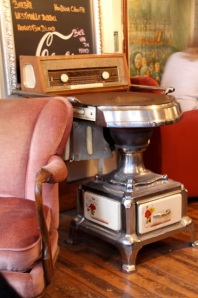 When the beer arrives all of its 0.5l comes in one huge glass. The waitress, thinking of the shopping she still has to do or the party she is going to in the evening  – anything to take her mind off what she is actually doing right now, tries to argue with me that this is what I have ordered and I should just make do. All I want is for her to bring me another small Kriek Boon, and we’ll have both. Never too much of a good thing, especially one you just can’t get anywhere else. Rolling her eyes she speeds off and eventually returns with another beer for the morons. Wonderful.

When it is time to leave I shake out my smallest euro coins and build a pile that pays our bill. The Dutch guys behind us are grinning. My husband is shrinking. I pretend not to notice. I never claimed I was a nice person.